King Cove Road: Balancing the needs of people and nature in remote Alaska

For the past 20 years, a gravel road in remote Alaska has been a bit like a tennis ball—bouncing back and forth between two powerful players—the State of Alaska and the US Department of Interior. In some ways, it’s not unlike many projects with conflicting interests.

In other ways, it’s unlike any project anywhere else.

tweetable: At the heart of the debate is the safety of residents versus protecting Alaska’s spectacular wilderness and wildlife.

The road would link King Cove and Cold Bay—communities with approximately 900 and 125 residents respectively—on the tip of the Alaska Peninsula where the Aleutian Island chain begins. The communities are more than 600 air miles from Anchorage and completely disconnected from Alaska’s main road system.

On January 22, the U.S. Department of Interior and King Cove Corp. signed a land swap deal that would allow construction of a 12-mile gravel road through the Izembek National Wildlife Refuge. That move is only the latest volley.

At the heart of the debate is the safety of residents versus protecting Alaska’s spectacular wilderness and wildlife. 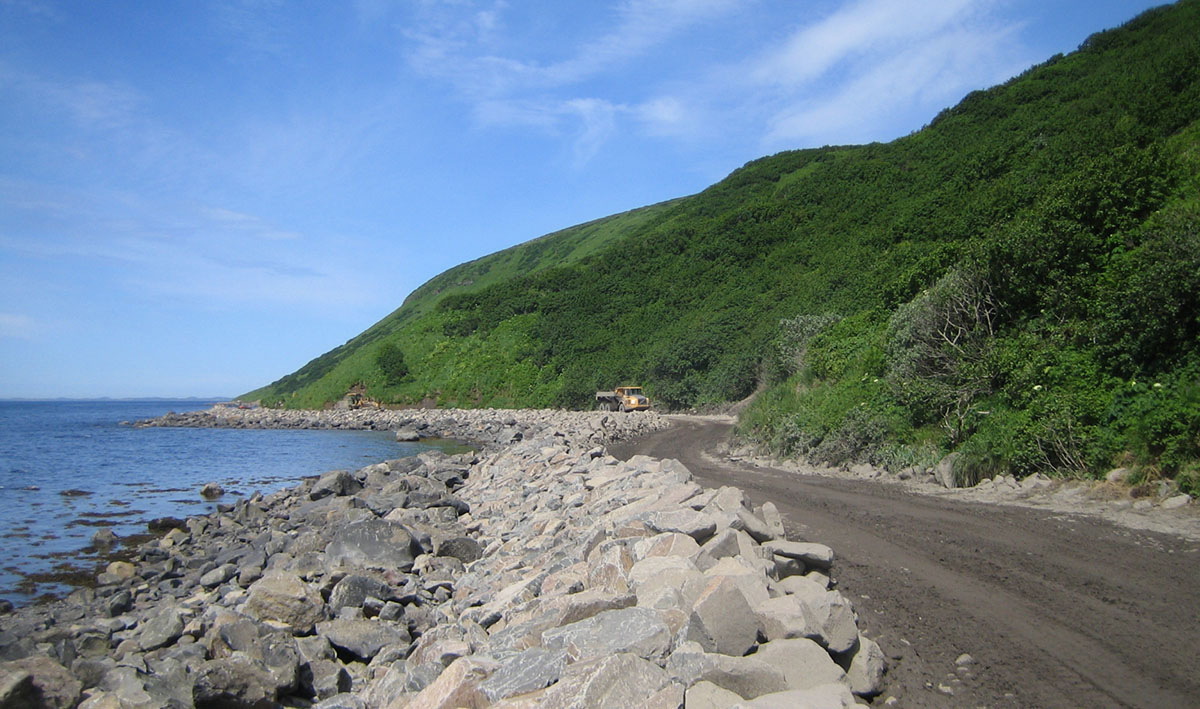 In 1998, the U.S. Congress passed legislation that provided the Aleutians East Borough (AEB) with funding to construct a year-round transportation link between the cities of King Cove and Cold Bay. The community wanted access to the all-weather airport in Cold Bay for medical emergencies. Between 1980 and 1994, 12 people died during aerial medical evacuations en route flying from King Cove to the hub airport.

Extensive study by the AEB concluded that a road from King Cove to the Northeast Corner of Cold Bay (NeCB) with transport service by hovercraft to the City of Cold Bay would best meet the communities’ transportation needs. An environmental impact statement was completed, followed by a decade of field investigations, study and design that culminated in three separate construction projects to complete an 18-mile road.

It’s one of the most memorable projects I’ve worked on but, even today, the “project” isn’t truly complete.

After several years attempting to use the hovercraft, the AEB abandoned it as a feasible transportation link. The 20-minute crossing of the waters of Cold Bay often proved too difficult for the hovercraft. So, quite honestly, the residents of King Cove are still in the same position they were previously—relying on good weather conditions for emergency flights. 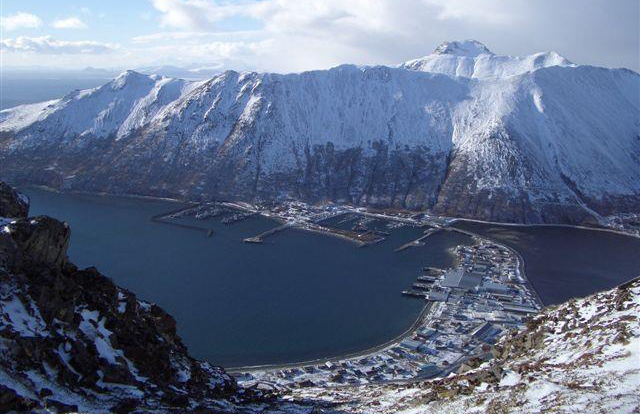 King Cove, Alaska, is on the tip of the Alaska Peninsula where the Aleutian Island chain begins. (Photo courtesy of Aleutians East Borough)

The weather challenges present in the Aleutian Islands—and specifically in Cold Bay—can be harrowing.

As part of the earlier road project, I participated in the final inspection that was attended by the Alaska Department of Transportation & Public Facilities, AEB, and the Mayor of King Cove. My experience traveling between Cold Bay and King Cove taught me to expect to be stuck or delayed in one location or the other due to high winds or poor visibility. The final inspection trip was no different. We arrived at King Cove Airport on an overcast afternoon, piled into the largest rental vehicle available in King Cove, and made our way out the new road to the NeCB. With the inspection complete, we all headed back to King Cove to spend the night, with plans to fly out in the late morning to catch the 1:30 pm flight from Cold Bay back to Anchorage.

When I woke up the next morning, the weather looked good, with only light winds and overcast skies. I grabbed a bite to eat and headed over to the King Cove City office to catch a ride out to the airport with the others. Our flight was at 11 am. By 10:45, the weather had changed and we were skeptical that the plane would make it in to King Cove in time for us to catch the Cold Bay flight back to Anchorage. Missing that flight meant another night away from home. The mayor picked up his phone and began reaching out to fishermen who could transport us to Cold Bay. I knew the run by boat was at least two hours, so we needed to find a boat ride quickly. It soon became clear that all the fishermen were out fishing and it appeared we were out of luck.

Finally, the mayor connected with a Cold Bay resident named “Happy” who was willing to bring his 15-foot skiff across from Cold Bay to the NeCB and ferry us back to Cold Bay.

As we piled into the small boat, I felt fortunate to have my bad-weather rain gear—and I felt badly for those without the protective layers. The wind was quartering into us, so ocean spray was coming over the bow. To keep dry, a large blue tarp was spread over the top of everyone in the front of the boat while Happy stood and steered at the center console. As water came over the bow and sheeted off the tarp, it accumulated in the stern, where I bailed constantly on what turned out to be a two-plus hour journey. When we arrived at the ferry dock, we learned that the flight was already on the runway ready to take off. Despite all our efforts, we missed the flight home.

The irony of our ordeal—considering the purpose and need for the King Cove Access project—was not lost on me. I wonder how this would have gone for a critically ill person needing immediate medical attention? 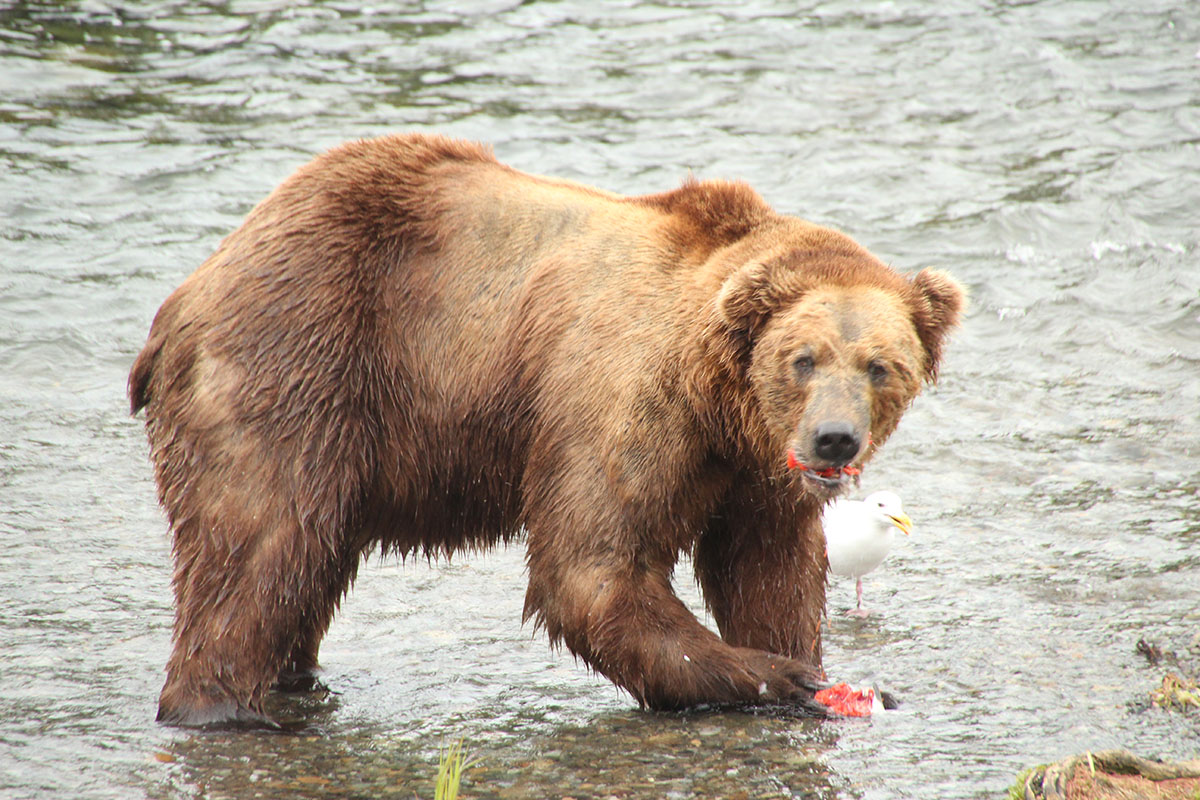 As with many projects, there is a balance between development and nature. Nowhere is this more the case than Alaska, especially remote areas where the wildlife greatly outnumbers the humans.

Designing the road was challenging for many reasons, but working within the conditions of the permit and minimizing impacts to fish, wildlife, and habitat was a rewarding experience. At one point, I walked the first six miles of the road alignment with a biologist from the Alaska Department of Fish and Game to document stream crossings and verify the presence of anadromous and resident fish. It was clear the local bear population was healthy. Streambanks were littered with fish carcasses. We were fortunate to avoid any bear encounters.

One segment of the proposed alignment ran parallel to a small stream and what became known as the “bear lunchroom” to the design team and client. The lunchroom had a proportionately higher amount of fish waste and bear scat, so we made a significant alignment shift away from the area to allow the bears to eat and rest in peace. I hope they appreciated it!

If the additional 12-mile road is built through the Izembek National Wildlife Refuge, the designers and contractors will face similar challenges.

I’ve lived in Alaska for 39 years. And I’ve designed transportation projects all across the largest of the United States. But the King Cove Access project is one of the most memorable.

Our designs considered the logistical challenges presented by King Cove’s remote location and the lack of readily available aggregates for building and armoring the road. Centuries of volcanic activity deposited ash in the top 3 feet of ground and it turns into a slippery mess if disturbed. Between construction phases, we encountered hurricane-force storms that washed out sections of the roadway.

And if the engineering elements weren’t challenging and interesting enough, the bears, waterfowl, fish, and other critters were important stakeholders whose habitat we strived to protect. Sometimes, designing with community in mind isn’t always about the people, it’s about all the “residents.” 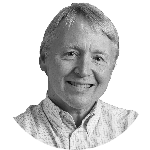 Steve Kari has nearly 30 years of engineering experience, designing and managing highway, street, and utility projects across Alaska. Working with multiple clients, Steve appreciates the importance of good communication from the beginning of the project. 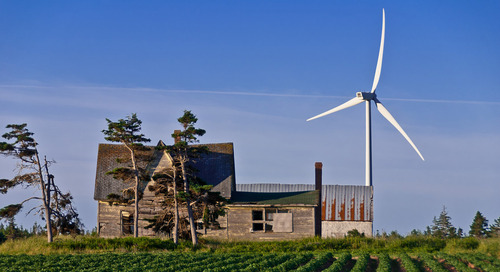 North American electric utilities: Where they’ve been and where they’re going 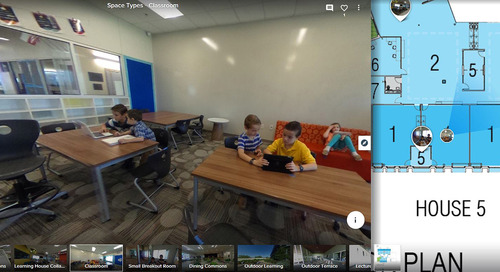 Find design inspiration for your school through virtual tours