Home » Blog Posts » From the Design Quarterly: Why study autonomous vehicles and the city?
× Share this Article

From the Design Quarterly: Why study autonomous vehicles and the city?

I have always had a deep interest in the design of cities and how people navigate them through different methods of transportation. One realized development that caught my attention during my undergraduate studies was Masdar City, which was designed to be a fully sustainable car-free city in Abu Dhabi. One of the main conceptual ideas was that people are the priority, not cars.

I think autonomous vehicles open the opportunity to enforce the design of cities around the person rather than the car, and that is truly the way it should be. 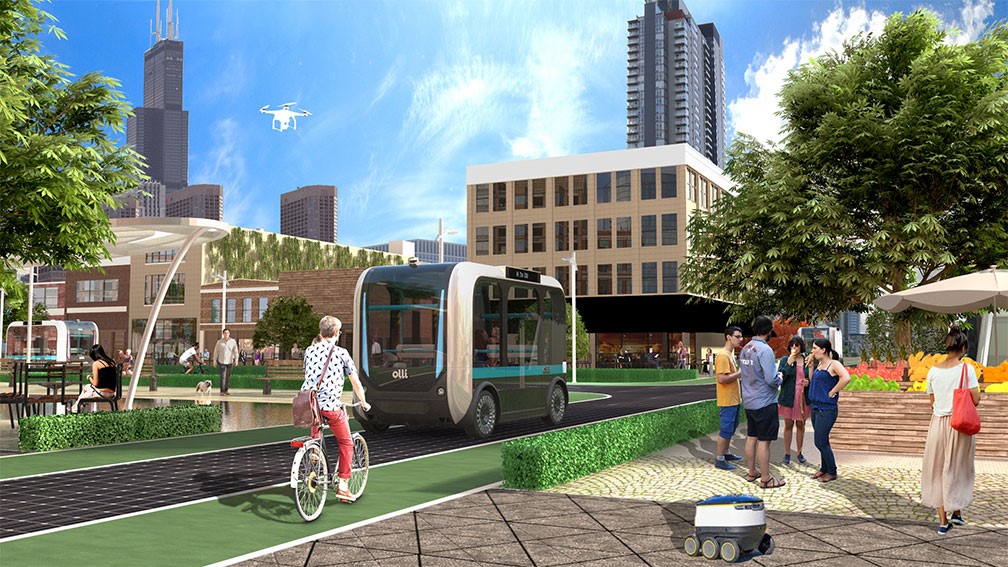 Why architects and planners are curious about self-driving cars

There is nothing that will be as disruptive to our urban fabric as autonomous vehicles. It will impact cities as much as the invention of the car did and lend us the opportunity to reclaim real estate once wasted by parking.

These vehicles will talk to the built environment

Once we reach level five autonomy (no steering wheel), the features of autonomous vehicles are limitless. Connectivity to other vehicles and infrastructure will be standard features. As designers, we ought to think about the user experience while in transit. Consumers say that if they didn’t drive, they would like to do everything from making calls to exercising while commuting.

_q_tweetable:Drop-off / pick-up areas will become crucial points of interest as they will be pivotal to the integration of smart mobility._q_

Autonomous vehicles can potentially help us in our quest to design more pedestrian-friendly cities. They could be synched with our current means of public transit for better transfer opportunities.

We are already seeing the impact of ride-sharing services in Chicago, where some hotels have noted a significant drop in parking lot usage. Instead of wasting that space, hotels and other large venues can think ahead and design the structure to properly accommodate a future use.

These changes are happing now throughout the world at varying scales and implementations. It is a matter of legislation catching up to the speed of technological advancement. I can envision the possibility of calling for a driverless ride-sharing service from anywhere in the US by the end of this decade. I would anticipate mass adoption where autonomous vehicles are the dominant transit norm by the mid to late 2020s. 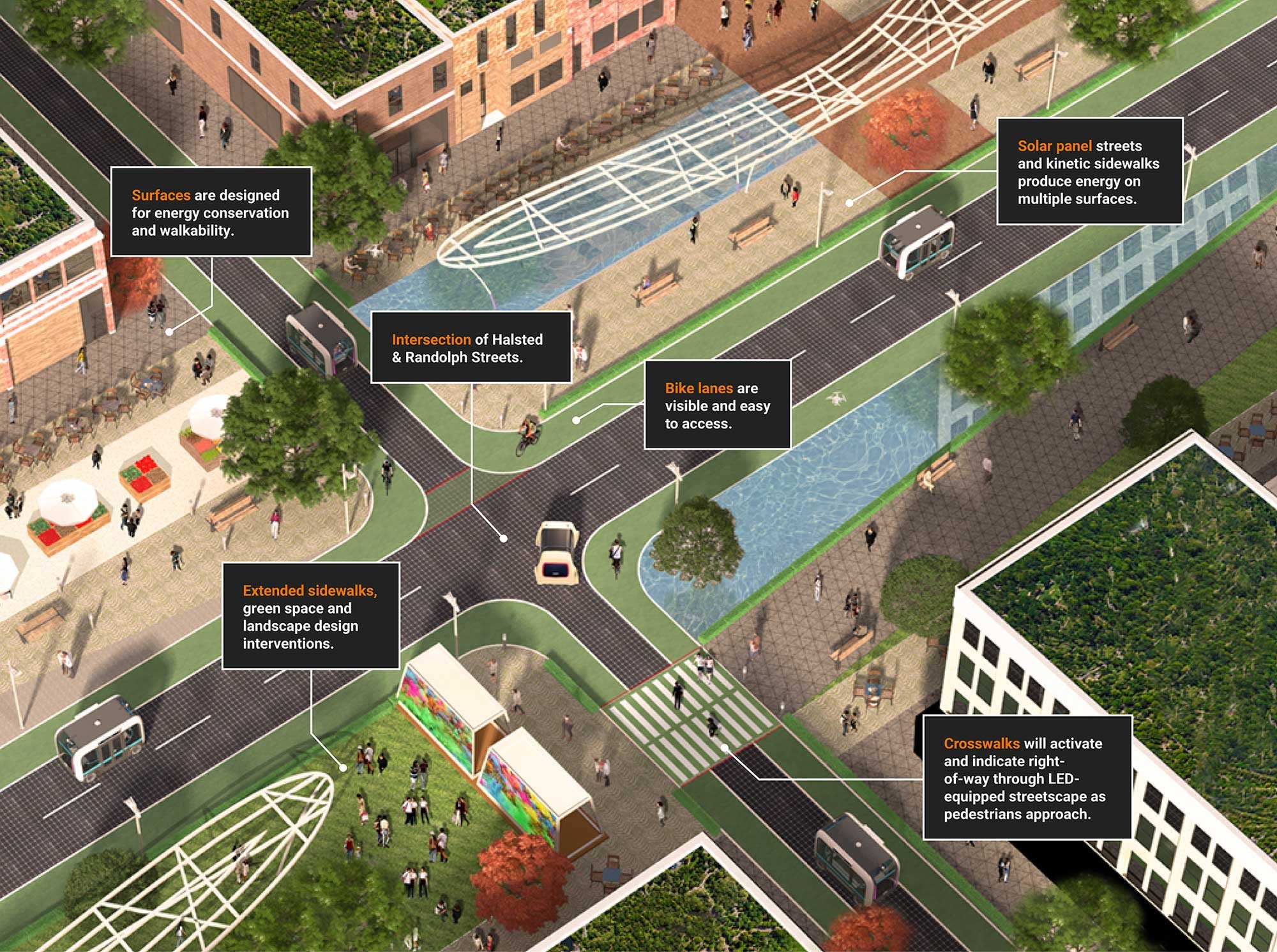 Why use Chicago and Randolph Street as your example?

Chicago has a very large suburban commuting population, which makes it a very interesting what-if scenario. This portion of Randolph Street (detailed in the above graphic) is in the West Loop, one of Chicago’s booming neighborhoods. Imagine all the surface area that is claimed by the streetscape for parking on Randolph developed into a more pedestrian-friendly area that allows for better usage throughout the day. (Currently, West Randolph Street in this area of Chicago has four lanes of traffic and parking on both sides of the street.) 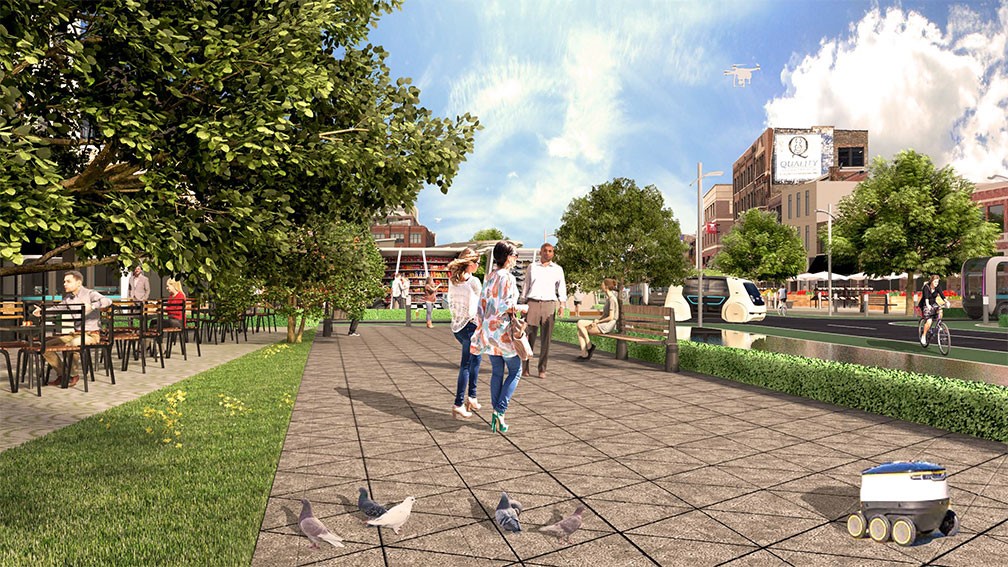 Large scale buildings like stadiums, entertainment venues, hospitals, universities, hotels, and shopping areas will have the opportunity to redevelop land that is currently allotted for parking. Residential buildings will do away with parking podiums we often see in downtown areas. Parking will become denser and require a smaller footprint as autonomous vehicles will not need to allow for exiting passengers and can therefore park closer to one another. Drop-off / pick-up areas will become crucial points of interest as they will be pivotal to the integration of smart mobility. Ultimately, real estate in the urban core will be completely transformed.

Each year, Stantec’s Greenlight program provides funding for its designers and thinkers to do research and undertake idea-focused projects within the company. Greg Kristo’s “Preparing cities for autonomous (self-driving) transportation” was one such Greenlight project. In exploring the possibilities for self-driving and the built environment in Chicago, Greg developed these concepts for a pedestrian-friendly streetscape of the future. 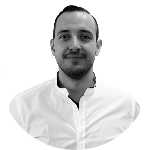 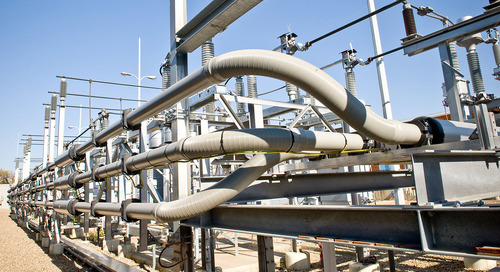 A powerful lesson: Selecting a consultant based on price alone is a risky decision

Building on past client-consultant relationships optimizes project budget and schedule, and promotes innova... 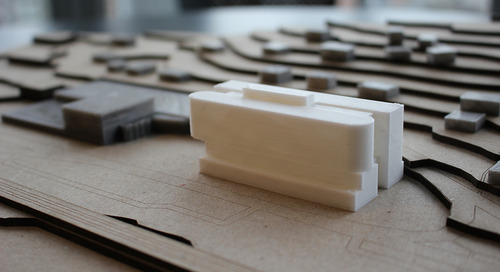 What will large scale 3D printing mean for the future of building design?

‘3D printing has the potential to change our whole design methodology’—designers talk about the present and...