By Marcel Tarnogorski and Alyssa Haas

If humans were to permanently settle on Mars, what would the architecture of a Martian metropolis look like? Inspired by the possibilities of parametric software used within Stantec’s Innovative Technology Development Team, our entry in the Marstopia competition, led by co-op student Marcel Tarnogorski, explored the potential for life on Mars with computational design. Curiosity led Marcel to investigate how parametric design with visual coding could be applied to realize a vision for the settlement of one million people on Mars.

The original brief was ‘What’s the vernacular of Mars?’ To answer that question, we had to look at the context and barriers to human habitation.

The truth is, on Mars, the atmosphere really wants to kill you.

There’s a lot of radiation, it’s extremely cold, there’s no oxygen, and there’s no atmospheric pressure. We looked at the harsh climate, considered the lack of building material on Mars, and the prohibitive cost of shipping materials from Earth and realized we needed to think differently about habitation than we would for a typical earthbound design project. Inspired by the architecture of “Early Earth,” we pursued the idea of using the planet itself as a building material, digging underground and using Martian dirt and regolith combined with sulfur to make our own “Martian concrete.”

We decided we didn’t want to focus on the beginning stages of Mars settlement, where just a dozen or so people would occupy a temporary scientific outpost. With a larger population and more permanent structures we could create a unique and recognizable vernacular architecture. And, if we’re going for a big city, why not double down and make a metropolis? A metropolis would have the ability to showcase a new Martian vernacular.

We looked at the architecture of cave dwellers and desert people who settled places roughly analogous to the Martian surface. The challenges in the desert or caves were similar—get yourself away from solar radiation, control the temperature to survive the heat, as well as the cold at night. 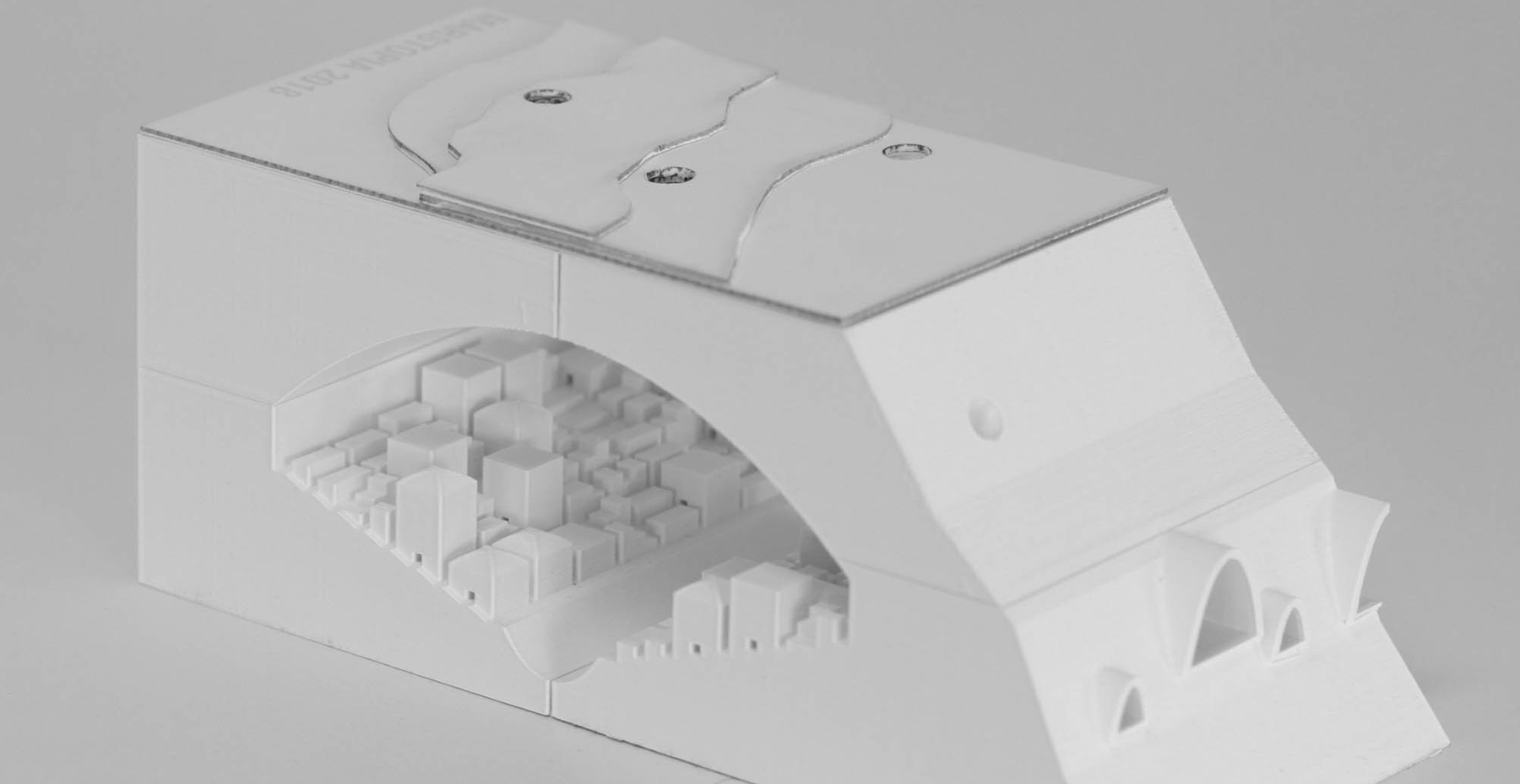 Vernacular architecture is about responding to the context with local materials—like the wooden fishing shacks in maritime regions designed with loose floorboards that can be replaced when the waves wash them away.

On Mars, there are no traditional building materials, like Earth’s trees or bamboo, just barren desert. But, the regolith on Mars itself is good at blocking radiation and has enough thermal mass to stabilize the temperature. Instead of trying to build a pressurized container of our own, we chose to tunnel into the terra firma. The tunnel provides us with a structure that can be made airtight and habitable. Pressurize the interior, provide oxygen, keep it thermally regulated and shielded from radiation, and the tunnel becomes an ideal setting for an underground city. 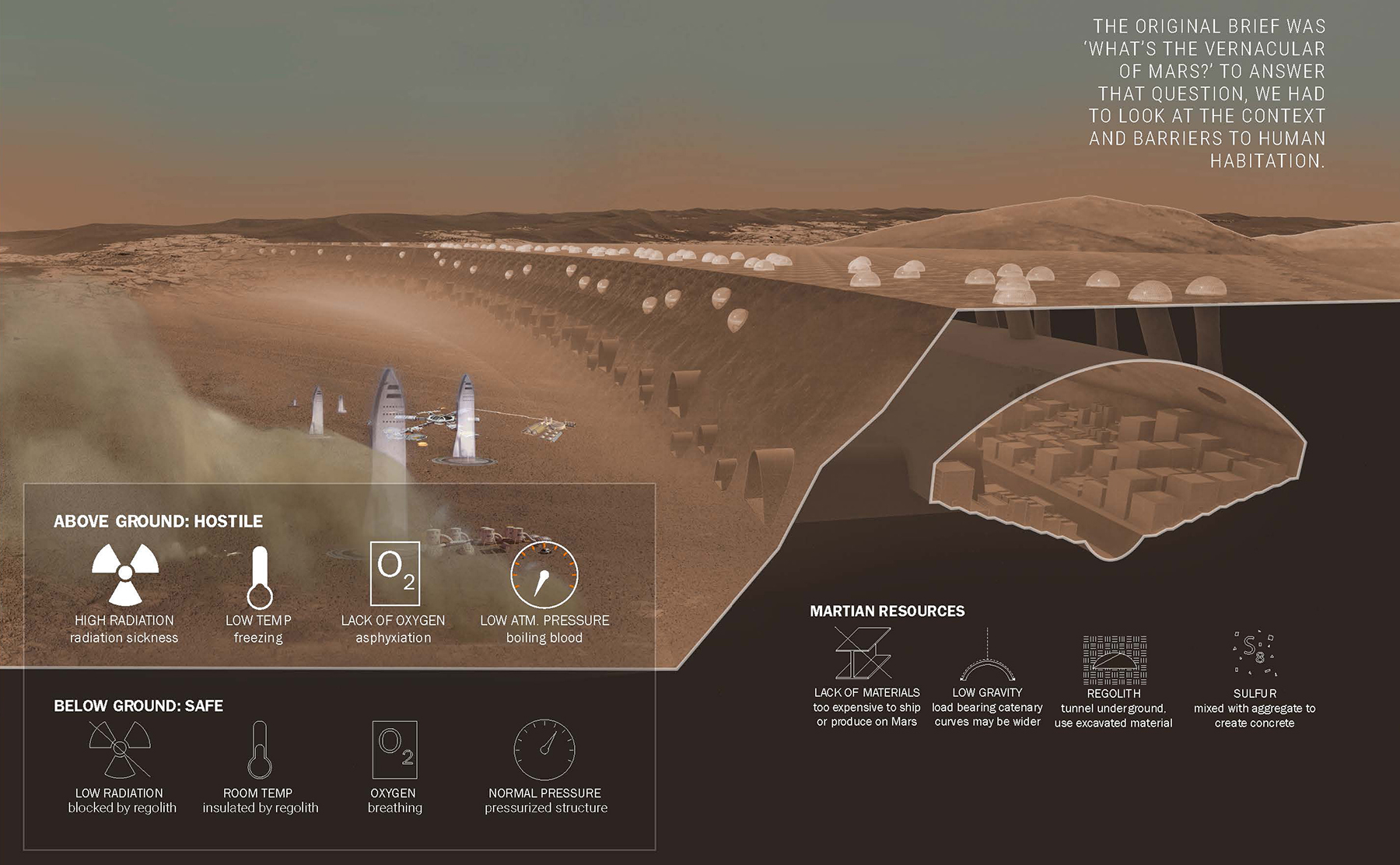 The gravity on Mars is one-third that of earth, which allows for stable super spans like our 314-meter-across tunnel. Another reason we can go big? There are no seismic events or earthquakes, therefore no seismic issues to be concerned about.

Environmental control takes place at the boundary of the tunnel and any penetrations through it. This frees up designers to express themselves on the interior of the tunnel without any thermal or pressure-controlled requirements for the building envelopes within.

So, how would we get to Mars? What would it require to make Mars habitable? We used SpaceX’s reusable BFR rocket, which will carry up to 150 tons per trip, as a guideline. We broke down the payloads for each trip: drones to start digging, drones to start 3D-printing structures and making the tunnel, and drones to test the tunnel before we start populating it with people. Then we figured out how many people could come per flight.

We would begin with 100 humans per flight, to ensure they have all the life support and material goods they need, but eventually we can bump it up to 200 humans/flight. We estimate 12,536 trips would be needed to supply all the drones and materials and human populace. If a fleet of 1,000 SpaceX rockets made a round trip every 52 months (4.33 years), that would mean 13 trips, spaced 52 months apart, or roughly 56 years to transport a million people to Mars.

The Hanging Gardens of Babylon and alien agriculture

The epic logistical undertaking required to just get people and houses built inspired us to look at the mythic Hanging Gardens of Babylon as both a vernacular design element and as a means for food production. The tunnel’s large pressurized and temperature-controlled cross-section could support agricultural crops which can be tended and harvested by drones, feeding the population of settlers and providing oxygen.

We wanted to create pragmatic amenities that would recall the comforts and pleasures of life on Earth. The skylights and river are key elements in carving out an oasis in an otherwise hostile environment.

_q_tweetable:The original brief was ‘What’s the vernacular of Mars?’ To answer that question, we had to look at the context and barriers to human habitation._q_The circadian rhythm of Mars is close to that on the Earth, so we inserted skylights on the tunnel ceiling to help settlers experience a normal day and night. The river below, made from Martian ice, starts at the top of the city and meanders all the way through, where its treated and pumped back up to the start. It serves as an aquaponic loop, a source for irrigation and habitat for fish.

Grasshopper, a parametric design software, helped us explore the architecture and infrastructure project details. Grasshopper allows designers to push and pull design parameters without rebuilding the model from scratch, as the software adjusts the design to the new value of the parameter in real-time. This technology means rapid option generation and informed decision-making on viability of options.

The entire model for our Mars metropolis was generated through Grasshopper, which allowed us to emulate the vastness, uses, and variety of building types of the city through computational design. We ran a script to populate the model to understand and simulate the needs and conditions for one million people to live on Mars in a pleasant community. We tried to make it feel urban. The city blocks are laid out on a grid, but each is unique, and they follow the curve of an actual cliff- landscape inside the tunnel. 3D block models were printed directly from Grasshopper to study how light would play against the structures.

Theoretical projects, like designing a Mars metropolis, let us push the boundaries of what’s possible with design technology, process and thinking at hand. It helps challenge our pre-conceptions and problem-solving skills, providing rapidly generated alternatives. It enables us to see possible efficiencies from adopting new technologies or workflow. It’s exploratory and compelling.

Architecture is moving quickly toward computational design and parametric design, we know that—and we want to be on the leading edge leveraging its potential to solve client and societal challenges here on Earth.

1. Land. Land a rocket that has in situ resource utilization (ISRU) systems which enable us to use what’s on Mars to create things we need for human habitation. Via the Sabatier reaction, carbon dioxide from the Martian atmosphere is converted into methane as a rocket fuel to return to Earth. While oxygen to support life is produced from electrolysis of Martian water.

2. Excavate and mine. Excavation drones start digging out the capillary while mining drones begin refining sulfur for use in Martian concrete, a mix of molten sulfur and regolith.

3. Excavate and pressurize artery. Excavation drones drill and bulldoze inside.

5. Populate. A crew of six humans settles a scientific outpost in the tunnel and begins planting.

6. Build structures in artery. Once new areas are made airtight, 3D-printing drones move in, building with Martian concrete.

7. Expand and excavate. Once the main artery is carved out and pressure sealed, it’s settled. Excavation bots carve out new pockets for expansion as needed. 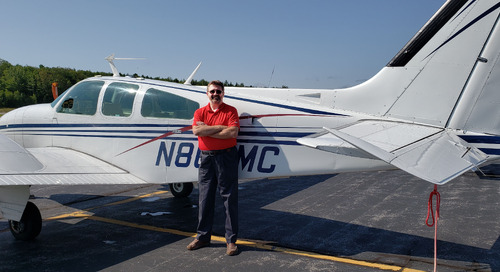 Planning for the ups and downs of the general aviation market 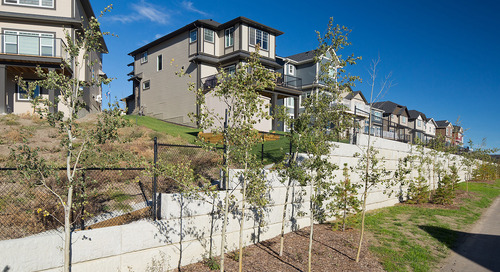