“Stores are closing at an epic pace. In fact, the retail industry could suffer far more store closures this year than ever,” stated CNN on April 24, 2017. It’s no secret that suburban retailing is in crisis. At the current pace, more stores will close in 2017than at the height of the Great Recession. As store vacancies—and lost tax revenues for local communities—mount, so do disinvestment, blight, and crime. Nowhere is this more visible than in the hundreds of struggling malls across the US.

Everyone blames online retailing for these problems, but in fact those purchases accounted for only about 8 percent of all U.S. retail sales in the fourth quarter of 2016. A more likely culprit: overbuilding. The US averages 7.3- square feet of retail per capita, compared to 1.7 square feet in Japan and 1.3 square feet in the UK. Online does pose a real threat (one analyst says that “50 percent of all retail not tied to bars and restaurants will go online by 2030”), but we already have more big boxes than we know what to do with.

Many of the areas around faltering malls face another serious threat: an oversupply of single-family housing and a dearth of high-quality, multi-family rentals. Millennials and empty nesters alike are choosing more urban, walkable environments. You may have read about this happening in cities, but it’s happening in suburban settings, too. These folks don’t want a house, and they want fewer cars, in part because the cost of car ownership has reached $8,700 annually. Times are changing … quickly. 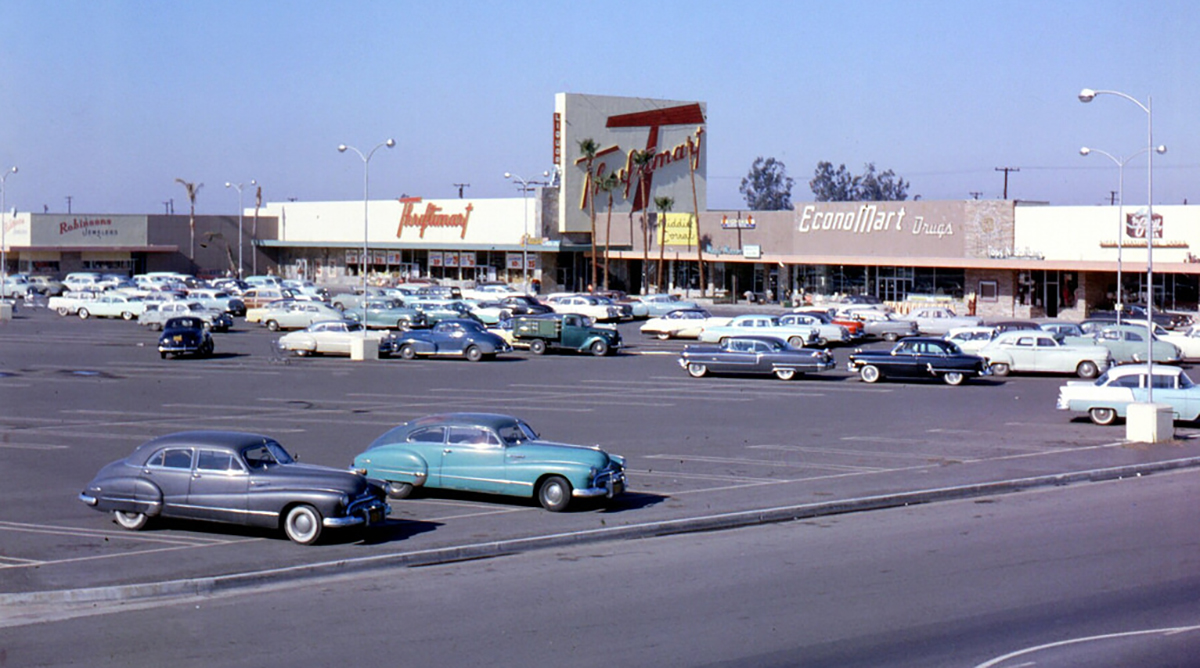 For the suburbs of the 1960s and ’70s, typically built on previously undeveloped farmland, malls served as town centers and community gathering places. But as decades passed, piecemeal development turned the areas around them into traffic-choked seas of parking lots and drive-in businesses with no center.

A growing number of US communities have begun actively thinking about how to reinvent these locations as distinct, authentic districts. Yes, the automobile—and the all-consuming parking spaces that go with them—will remain (for now) but dramatic transformation is still possible. We’ve had the good fortune recently to work with two municipalities that have taken the lead in shaping their futures by rethinking the traditional mall.

Planning from the outside in

Ohio’s Miami Township, south of Dayton, faces a unique challenge. While the area suffers from the issues touched on above—store closings, aging buildings, auto-dependent development, and a lack of connections among adjacent land uses—the mall itself is a regional destination that remains relatively healthy. The focus of the plan quickly became one of creating a district around the mall that would improve the entire 2 square miles of the study area.

During the planning process, community members frequently said how much they enjoyed walking within the mall in fall and winter. The master plan creates a new Main Street along the eastern edge of the mall that crosses the current Sears site, which will shortly close. That will set up a direct intersection with the mall’s internal Main Street, creating a new focus for the area. 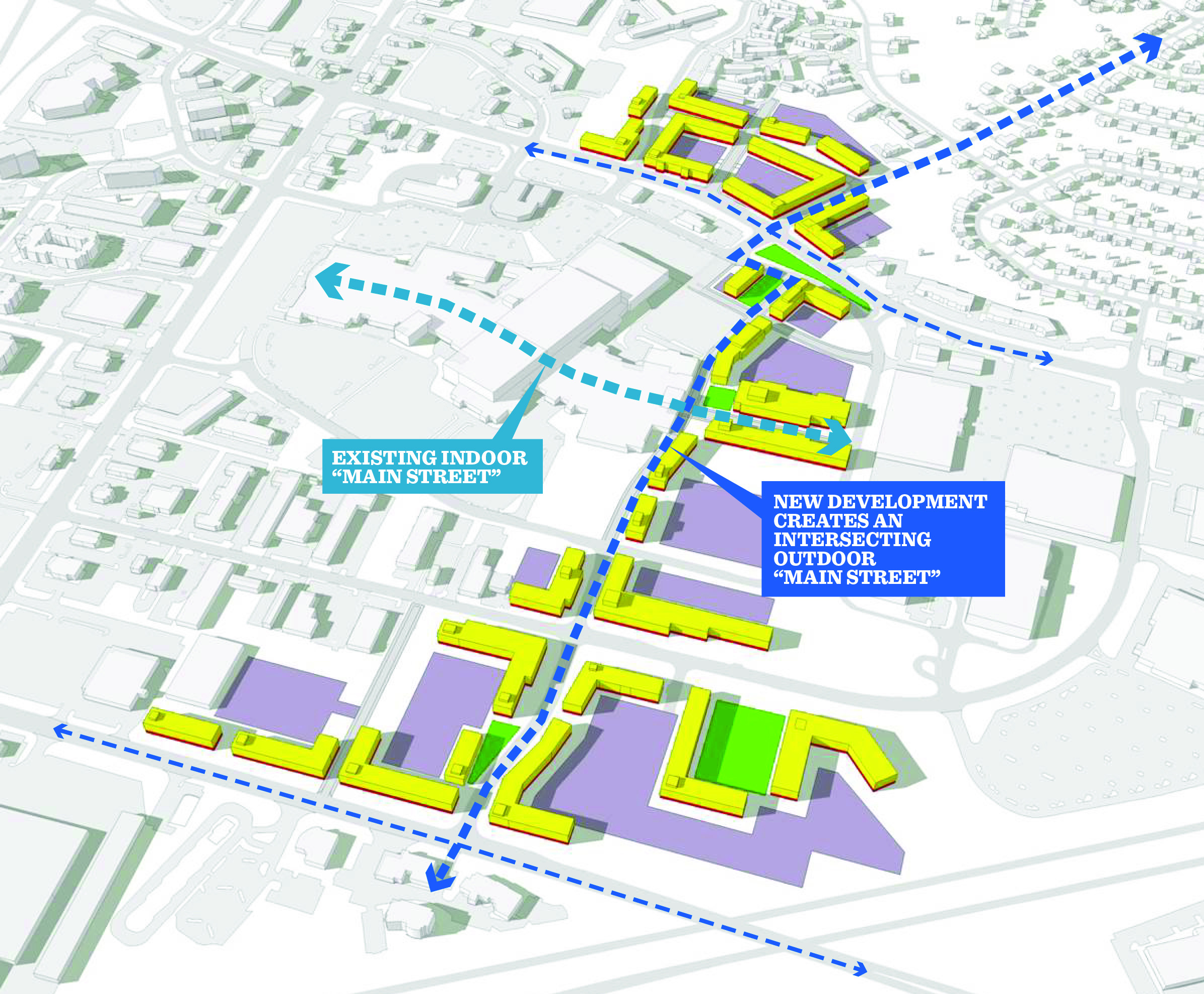 High-visibility signs of disinvestment made the entire district feel rundown and worn-out. In addition, the name “Dayton Mall Area” conveyed no sense of identity or location. Therefore, our plan for the area around the mall also included establishing it as a defined—and branded—district. The new name, “Miami Crossing,” gives a poorly defined area a clear identity; the marketing plan reinforces the new identify with signage, banners, and distinctive landscaping at key gateways. 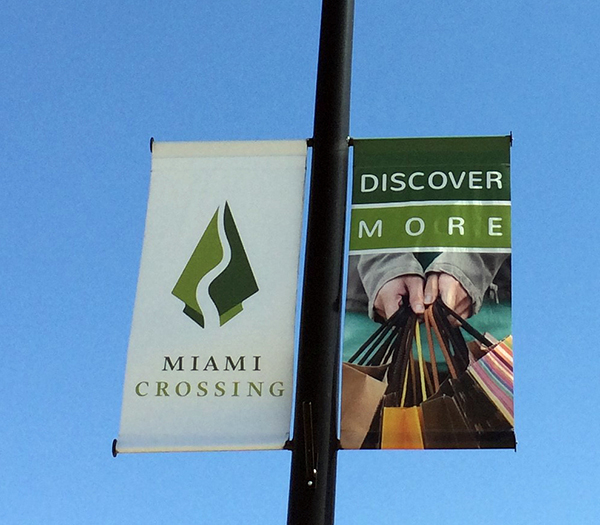 Planning from the inside out
The Route 419 Town Center Study in Roanoke, Virginia, had similar planning goals: conversion of auto-oriented strip development into a mixed-use, walkable town center. In this instance, however, the Tanglewood Mall has been unable to compete with a larger regional mall 20 minutes away. New owners bought the property just before the planning effort began, and they understood that the property couldn’t count on a future as a traditional, enclosed mall. They actively took part in the planning process and helped us develop a concept that deconstructed much of the mall interior while preserving anchor tenants. This may seem like a side story, but in most malls the anchor tenants control parking and view sheds, and they often have a say in which stores can (or cannot) locate in the mall. The mall owner frequently has only limited control in determining the property’s future.

All sides understood that entertainment- and experience-based retail (think sit-down restaurants with outdoor seating within an easy walk of local or boutique retailers) will define future success. That helped our team create a small-town center where the enclosed mall will give way to a wider mix of uses, including new housing, an inviting landscaped open space, and a network of new landscaped streets that invite walking and improve connectivity across the district.

The upheaval in retail and shopping preferences presents many challenges, but it can also prod everyone to take a fresh look at traditional suburban development patterns. Miami Township and Roanoke County show that local leaders don’t have to wait for outside forces to reshape them; they can shape the future by pulling property owners, nearby residents, and other stakeholders together to chart a new course for the community. 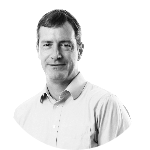 Steve Kearney is a project manager and senior planner with Stantec’s Urban Places team. He is focused on developing urban revitalization plans at both neighborhood and district levels. 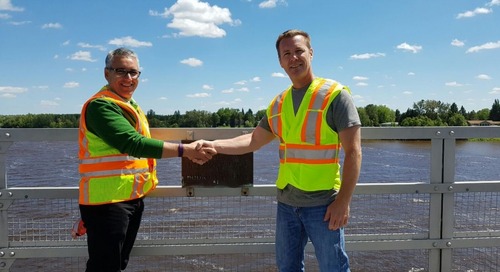 Can you do your client's job?

How the Minnesota Department of Transportation is taking the "Us vs. Them" mindset out of the client-engine... 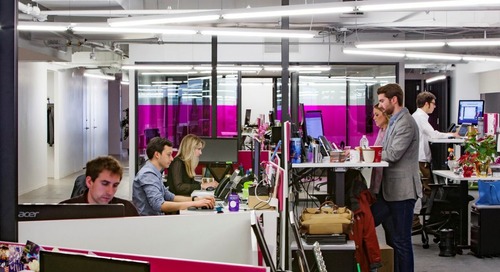 7 impacts worth considering when reducing the size of your workplace